Augmented Reality is gabbing attentions of industries, businesses, and ordinary people with its broad application range. It has triggered curiosities in the minds of readers, and the current attempt is the first step to provide a history of AR concept and its maturity in the present. Let’s traverse the entire path with a number of parts in the series.

The Augmented Reality (AR) and Virtual Reality (VR) are highly confusing terms for the ordinary people. It is because they are not much familiar with computing or computer related terminologies.

Therefore, it is better we remove the confusion first by defining both in simple words.

In short, VR devices focus on the current reality through sensors such as camera and impose an additional layer of information or computer objects on it to enhance its usefulness further.

For instance, by providing additional info, GPS location, history, labels, and much more to enhance the consumption of the current real-world focused on the device.

For the sake of better understanding, we can take some examples granted.

Suppose you are visiting a historical place and your mobile phone has AR app to provide AR services for the same location.You can focus your camera on the part of that place and let app to process AR data exchanges.

You might have additional information imposed on the image seen through your mobile phone camera on the screen such as:

Arrows or directions to guide you further in the place.

With these fundamental understanding about Augmented Reality, we would like to proceed to know how AR concept has gained ground in the history and came into present shape to yield sweet fruits of tech advancements.

The Birth of Augmented Reality and the Past

To trace the birth of augmented reality, we have to dive timeline a century back.

In 1901, L. Frank Baum, an author has placed an early concept of AR in ‘Character Marker’ idea where an electronic gadget overlays the data onto real life people to describe its characteristics.

In 1962, a cinematographer developed ‘Sensorama’ machine with multiple sensors. It was emitting aromas, winds, and sounds and seemed a giant arcade game. Of course, we can say it as a step towards virtual reality rather than AR.

In 1968, Ivan Sutherland took a real step towards augmented reality by inventing the first head-mounted display (HMD) and blurred the boundaries between physical and digital world forever.

Afterwards in 1974, ‘Videoplace’ developed by Myron Krueger, as an artificial reality laboratory. He had created an interactive environment with the help of combined projectors, video cameras, specialized hardware, and onscreen silhouettes of users.

He made possible it by working on a number of years on the custom computing system to obtain special effects including image recognition, content analysis, and real-time responses. Thus, he made possible by amalgamating graphics images with video images in real-time. 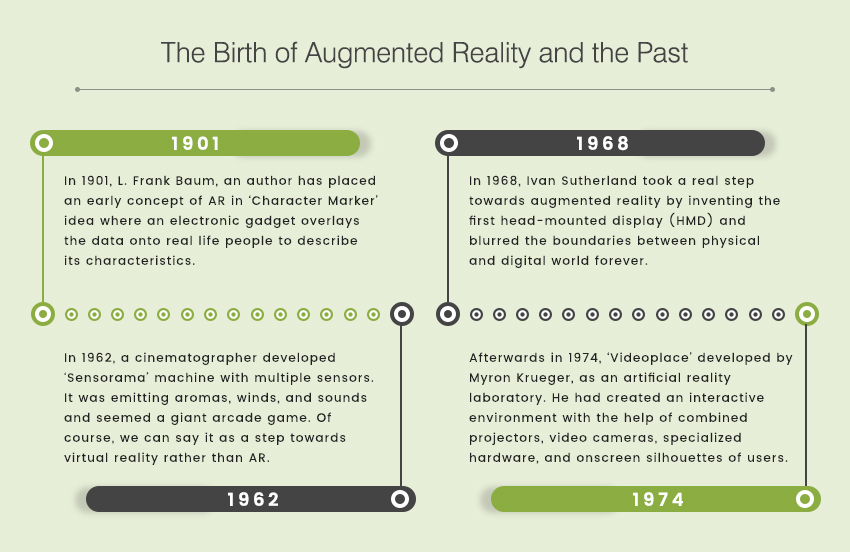 In 1980, Steve Mann released the first wearable AR device with overlaying capacities for texts to overlay images in the photographically mediated scenes.

A year later, in 1981, Dan Reitan has enhanced the concept and devices to bring AR on TV. He has taken geospatial maps to overlay multiple weather radar images to earth images to display weather broadcasts on TV.

In 1990, Thoma P. Caudell, a researcher at Boeing coined the term ‘Augmented Reality’ and developed a head-mounted digital display device, which was guided workers in the Boeing aircraft.

The Juvenility of Augmented Reality

However, in 1992, Louis Rosenberg developed virtual fixtures in the USA Air Force Research Laboratory, and with it properly functioning AR system comes into existence.

In 1994, Julie Martin has created first ‘Augmented Reality Theater’ and it was for dancing. In it, the dancers and acrobats were manipulating large size virtual objects. They were doing it in real-time as well as in the same physical space and performance plane.

In 1999, Frank Delgado and the team successfully tested LandForm, an AR software providing overlaying video on the real ground with runways, taxiways, roads, and street names.

At the beginning of the millennium, Brush Thomas has developed ARQuake, an outdoor AR mobile game, at the University of South Australia. In 2008, AR travel guide was prepared by Wikitude for Android phones and provided cutting-edge features and experiences at that time.

In 2013, Google has announced beta test of Google Glass as an advanced AR wearable device and made AR industry younger than ever. 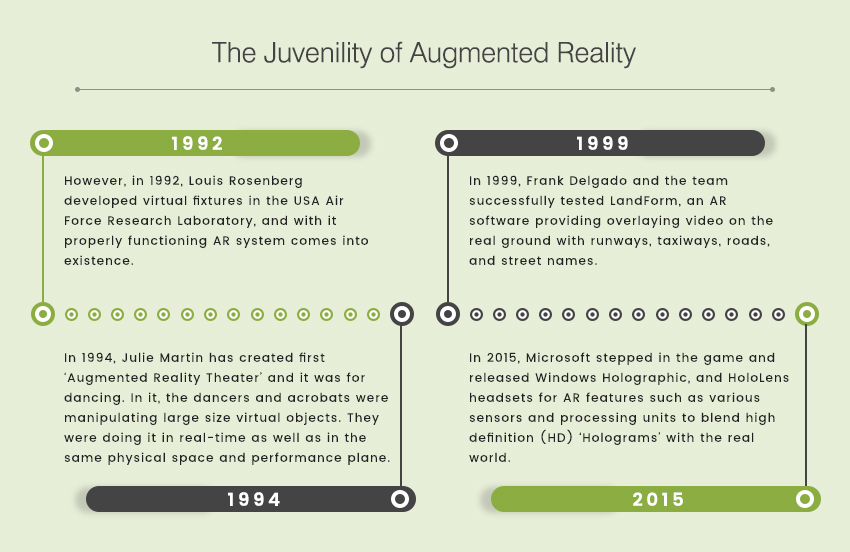 In 2015, Microsoft stepped in the game and released Windows Holographic, and HoloLens headsets for AR features such as various sensors and processing units to blend high definition (HD) ‘Holograms’ with the real world.

The peak of AR mobile apps came with Pokemon Go game for iOS and Android released in 2016, and it has created a buzz in the world by making people made and prone to various accidents in different countries of the world.

The entire history of Augmented Reality and its applications have created many questions in your mind like how AR works and what values it can add in our life. In the next part which is Technicality of Augmented Reality, we are going to satisfy your curiosity, just wait for a couple of  days. Thanks for reading.

Want to to build an augmented reality apps for Andoid or iOS?Contact ourexpert Mobile app developers and make your dream come true at SysBunny.