Today the Internet of Things (IoT) is becoming a phenomenal thing in technology front. It has potential to impact the entire mobile app development industry and processes and resulting in a massive shift in the development and usage of the mobile applications.

The Nature of IoT Applications 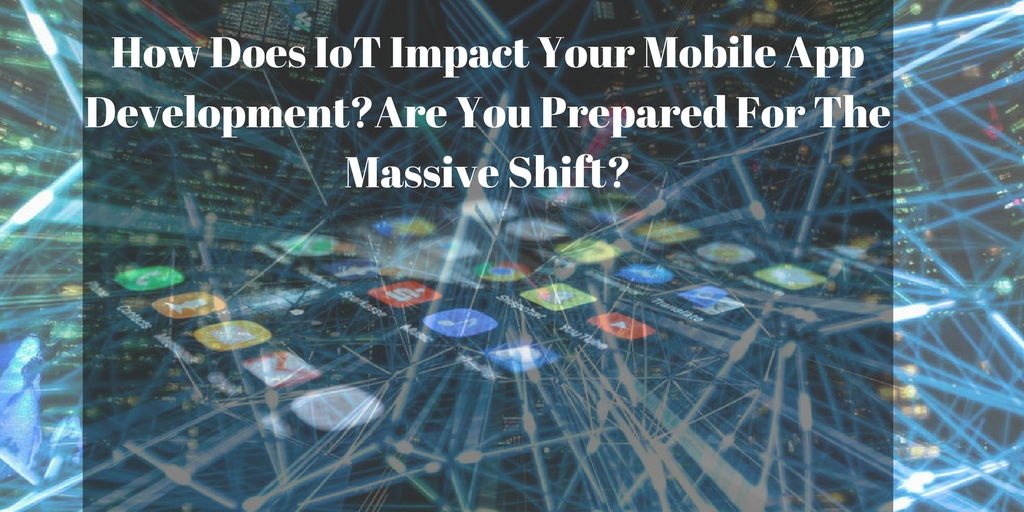 Perception of Mobile Apps before IoT

Before the introduction of the IoT technologies, the mobile apps used to use as a endpoint applications to accomplish the designated tasks such as streaming music in the music apps, locating a business in the location-based app, and playing games in the game apps.

Perception of Mobile Apps in IoT

In the IoT stack, the mobile application acts as a gateway application instead of remaining up to an endpoint applications. In the IoT application, hardware, machine, or a living body/part is becoming an endpoint to collect and send data to the mobile application. The mobile app is acting as monitoring and operating interface application by bridging the rests of IoT application components at the technical point of view. For instance, in a thermostat IoT application, the mobile app is integrated with Wi-Fi enabled thermostat and act as a remote control to automatically operate the thermostat by considering the weather and location data collected by the mobile hardware and apps. Thus, mobile devices also act as sensors and accumulate GPS and weather data in the background and sent to web servers or cloud services to communicate with the attached, connected devices in an IoT application. In short, mobile applications play dual roles in M2M data exchanges and act as operating or monitoring devices/interfaces in IoT stack. Therefore, IoT is perceptibly shifting the entire mobile app development approaches right from app architecture, strategies, integration and mobile app designed by UI/UX designers of right programming technologies. If you are a software developer and eager to know how IoT effects and carries massive shifting in mobile app development, I have listed a few points to grasp at tech point view. Let’s check it.

The Selection of Starting Point

The IoT application development is an emerging field in the software development niche. The shifting roles and perceptions of the mobile application in the IoT stack confuse newbies and even mid-level IoT app developers that where to start and how.

Recommended: Questions to Ask before Creating Mobile Apps for Business

In fact, IoT is enormous and much bigger than we anticipate it at the tech point view. Of course, the recent advancements favor the emergence of a framework to ease the life of IoT application developers. It will cut the trial and error efforts to figure things out while building the IoT mobile apps right from scratch.

“To avoid confusion where to start in IoT application development, developers can take help of the latest IoT platforms or frameworks.”

It is easy to connect the computing devices through different modes of connectivity available today like wired and wireless technologies including Wi-Fi, Bluetooth, and cellular services/LTE/3G/4G. Unfortunately, collecting and sending data from the non-computing components of IoT stack such as various sensors and machine parts becomes a big challenge for IoT app developers. It is embedding programming technologies and hardware that can ease the connectivity problems. However, IoT mobile app developers should learn the respective technologies used in embedding the endpoints with the IoT network.

The IoT application can have minimum five tiers such as device, gateway, data, analytics, and application. Now, application tier may have a web application or apps for all mobile platforms and role of the application to provide a user interface to operate, control, and monitor the IoT processes. Therefore, the mobile application needs to be more cohesive and different from the traditional apps that only act as endpoint applications, not a gateway application or assist into more functions.

“Mobile apps may be native or cross-platform, but must capable of integrating all tiers involved in the mobile IoT app development seamlessly.”