Augmented Reality/ iOS
By releasing Core ML and ARKit, Apple has bet on the future and established its technical superiority in the mobile app technologies. SysBunny analyzes core concepts and reactions of releasing both frameworks in the iOS app development industry with the current post.

In June 2017, Apple announced the release of two frameworks, Core ML and ARKit. The Core ML is a Machine Learning API, and ARKit is an Augmented Reality SDK. Both are altogether different technologies but have a high significance in shaping the future. To learn their impacts on our lives, let’s understand both one by one.

Apple is working in machine learning (ML) and artificial intelligence (AI) for a long and Siri is an apparent result. With Core ML, Apple has made Machine Learning for everyone. 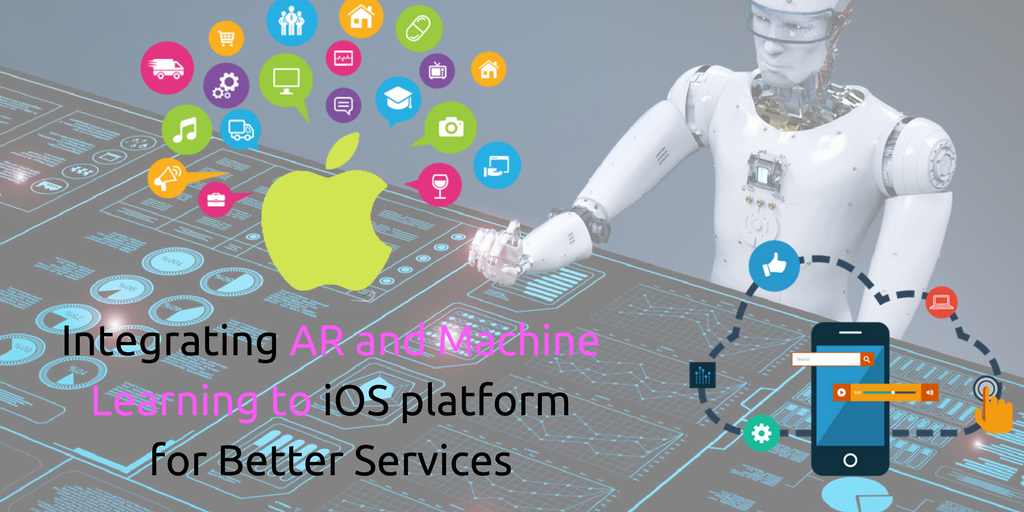 Apple’s Journey from NLP to ML

During the period of iOS 5, it has introduced natural language processing (NLP) through the NSLinguisticTagger framework. At the time of iOS 8, the Metal framework arrived with enhanced GPU capabilities to provide immersive gaming experiences. In 2016, Apple developed an Accelerated framework to process signals and images using the Basic Neural Networks for Subroutines (BNNS) technologies. Now, it has placed the Core ML framework on the top of both Metal and BNNS frameworks. The former two frameworks required a centralized server to process the data for NLP and AI processes. With the intro of Core ML on the top, there is no need to send data outside the devices, and the data processing is accomplished with powerful A9, A10, and A11 chips. It also strengthens the data security within iOS devices.

To understand how Core ML is working, we can divide the process into two steps. The first one is creating a Training Model by applying ML algorithms to the available training data sets. The next one is to convert the training model into a file as the Core ML Model file. The Core ML Model file helps mobile app developers to integrate high-level AI and ML features. The entire function flow of Core ML API helps to make the system “Intelligent” predictions. For iOS developers, X-code IDE can create Objective-C/Swift wrapper classes once the model Core ML Model is included in the app project. The Core ML model consists of class labels and input/output and can describe the layers in the framework. Apple has made decent efforts to help iOS app developers provide maximum support to develop customized AI and ML solutions with ease and speed.

The phenomenal success of Pokémon Go has grabbed many eyes in the mobile app market and inspired the entire app industry to take serious note of Augmented Reality as an upcoming and stable technology shortly. In the WWDC in June 2017, Apple has announced the release of ARKit as an Augmented Reality framework for iOS developers. However, Apple is not the first company in the industry for AR application support and growth; other players like Amazon with Alexa, Microsoft with HoloLens, and Google with Project Tango have already established their presence well before Apple. The history of Apple reveals one thing that Apple always brings innovative and long-lasting technologies to the market. The same goes true for AR technologies too. It has taken entirely different approaches to provide AR experiences in iOS devices.

The existing AR frameworks and tools developed by the rivals of Apple are based on the creation of three-dimensional models, and that requires AR-specific hardware, processors, network, sensors, and software. To cut it short and provide high-end AR experiences, Apple has introduced a revolutionary VIO (Visual Inertial Odometry) technology, which blends the camera data with CoreMotion data with higher accuracy without any additional hardware-software help. In the AR rendering, technically, virtual objects are placed in the environment’s image or before the eye retina through AR devices like headsets, glasses, and lenses. The standard AR devices create virtual points in the image of the physical environment using GPS or other location-tracking algorithms for external calibration. However, in ARKit, it uses projected geometry (World Tracking) technology, which helps to trace a set of points in the environment around the iOS device. These points are updating in real-time as the device is moving. Thus, ARKit eliminates the entire process of external calibration. In the world tracking process, the ARKit framework detects the plans in the physical environment to place the virtual objects. Similarly, the framework determines the availability of lights in the real world and adjusts lighting for the virtual world. Moreover, it also determines light effects like shadows from the perspective of real-world lighting sources.

The AR activities in Facebook AR apps/devices are confined to its camera app only, while Project Tango requires separate and customized hardware to display AR activities. Against these, ARKit is compatible with all iOS devices and required no additional hardware or software to render the AR activities. Therefore, it is a superior technology in AR and holds strong prospects for iOS developers to create innovative AR apps for iPhone and iPad devices. Moreover, Apple has decided to infuse dual cameras on iOS 7 and other advanced versions. It supports AR applications to gauge the distance correctly between two viewpoints and ease the triangulation process to enhance depth sensing and better zooming. Therefore, iOS handsets can create depth maps with pinpoint accuracy and enable differentiation between background objects and foreground objects.

Machine Learning (ML) framework by iOS platform provides extensive support for deep learning technologies with more than 30 layer types. The app developers can use NLP APIs to add features for language identification, speech, access recognition, face tracking, barcode detection, and much more. With ARKit and high-speed A9/A10/A11 processors, iOS developers can create customized VR experiences over the physical world for iOS AR applications. Thus, both technologies seem promising for Apple’s coming days, and the bet is right at the right time and with the right tools. If you were thinking of developing your mobile app leveraging Augmented Reality and Machine Learning technologies, SysBunny has talented iOS developers to hire at competitive marketing rates. Would you like to know more about mobile app development skills and our quality apps? Contact our team, please.
Tagged with: Augmented Reality • iOS apps development