Mobile apps
Bitcoin is becoming the talk of the town thanks to a surge in its value in the currency market, and Blockchain technology behind the Cryptocurrency is becoming a worthy asset for the mobile app developers who have gained mastery over its implementations in diverse use-cases. The current post is summarizing all in a nutshell.

Recently, the value of a Bitcoin crossed $10K mark and draw the attention of the entire world besides finance, banking, stock markets, and currency markets. Blockchain technologies behind the Cryptocurrency / Bitcoin become the talk of the town and sharp interest points in tech-world.

Now, one question may arouse in your mind that what is the connection between currency market and tech community. The answer is damn simple because Bitcoin or Cryptocurrency is not a tangible currency rather it is a digital currency and existing only in the digital world. The Blockchain technology is behind it, and software developers have created it with long-term efforts as open source project. GitHub is known as the biggest software collaboration platform and used by low to top-ranked developers as well as myriads of organizations and their IT teams.

According to GitHub data, the core code supporting Bitcoin was first published in 2009 and number of projects working on Blockchain started getting traction in 2011 and touch the peak in 2016.

However, after several corrections, the Cryptocurrency market stabilized in 2017, but it becomes the cause to spreading the awareness regarding digital currencies and technologies like Blockchain behind it. If you have any curiosity to know what Blockchain is and how it works, a lot of literature and articles/posts are available to dive in the tech aspects. However, on coindesk.com an image by Maria Kuznetsov is illustrating it is in highly comprehensive and simple manner. 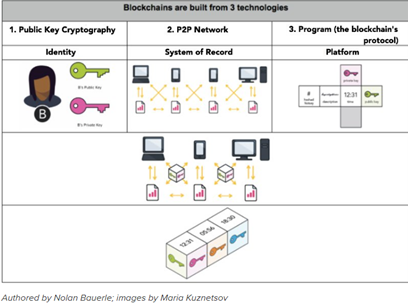 Now, software developers are looking implementations of Blockchain technologies other than Cryptocurrency generation. Therefore, mobile application development companies are looking a wide scope for a challenging but highly rewarding work for a long-term. In due course, the mobile development company has started investment on getting Blockchain application development skills, training, and new recruitment. The forward-thinking means futuristic vision possessing mobile app development teams/companies are considering Blockchain technology flairs as a worthy asset that may yield sweet fruits, if not today, but surely tomorrow. Let’s see which are other possible and existing applications/implementations of Blockchain technologies than Cryptocurrency market, in the field?

Now, we know Blockchain sustains on a decentralized network and consisting distributed ledger with data secured by cryptographic technologies. The Blocks or Blockchain contain a record of ownership, timestamp, and value. The validated blocks are forming a linear chain in chronological order, and the entire chain of blocks is continually updating in real-time. Thus, each member participating in the Blockchain network has an updated copy of the ledger broadcasted either as private or public. If you replace transaction data of a currency value with a record of the transaction, you will have a highly secured and authenticated contracts in between two or more parties. Since chances of data manipulation are nearly zero, legal validity established through a peer-to-peer network, a new trend of signing smart contracts in between a business and its customers emerged, and software developers are looking to develop software including mobile applications to ease the job. In due course, invoices generated and placed in blocks of Blockchain and payment done by correspondent parties through Cryptocurrency or other ways with proper validation make smart contract highly secure and extremely cheaper compared to real-world legal procedures through paperwork.

Technically, Blockchain holds a unique identity of each participating node in the network. Moreover, the person owns that node identity can register personal info with the identity on the Blockchain network privately/publically and can re-use it as per need like in banks, government organizations, insurance, educational institutions, and many places where digital identity is valid and be registering it consuming time for each instance. The role of software, particularly mobile developers to create an app for digital identity registration and safe use in the public life.

In the real world, shares or stock trading is a bit clumsy and lengthy process when it takes place cross-border among the states and nations. Blockchain offers an easy way for participating parties to create highly secure share documents in the network, validate transactions, allows rapid settlement process, bring greater accuracy even cutting the middlemen in the entire trading process. Mobile application developers working on Blockchain technologies can create an efficient stock trading app for people belong to the industry and public participating in it.

These are some samples of the prospects of Blockchain technologies in the field of mobile app development, but a lot is possible and coming in the future. If you are eager to jump into Blockchain ship with a unique idea or an aim to benefitting your existing business/profession, you must have SysBunny like a perfect and dependable guide as well as expert app development partner with flairs in Blockchain technologies and tools.